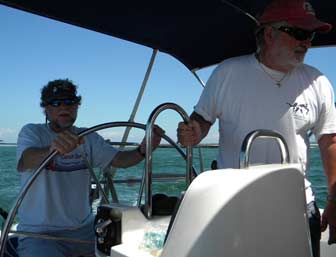 Working at a SW Florida yacht brokerage, the opportunity occasionally arises to deliver a recently purchased boat to a new location, and in May 2010 two friends and I were contracted to deliver a Hunter 376 cruising sailboat from Charlotte Harbor, Florida, to Dinner Key Marina, on Biscayne Bay in Miami. Two of us carry 100-ton and 50-ton US Coast Guard captain's licenses, and the third crewmember is an experienced cruiser, so a quick trip down the southwest Florida Gulf Coast, through the Keys at Marathon, and up Hawk Channel to Miami should be a luxury cruise in the well-equipped Hunter. The boat had received a fresh bottom paint job, and a mechanic had replaced stuffing box packing, fuel filters, and other routine maintenance items after the boat was purchased.

Routine delivery preparation includes checking the boat's condition and the weather along the planned route, determining fuel and provisioning requirements, and ensuring that all safety gear and required equipment are aboard. Fortunately, this sailboat was equipped with a large Garmin color GPS chartplotter, Raymarine autopilot and Autohelm 16 mile radar, along with Raymarine ST60 depth, boat speed and wind instruments. The day before our departure, we checked the operation of the engine and all navigation electronics, as well as the Simpson Lawrence electric windlass for the 45 lb CQR plow anchor. 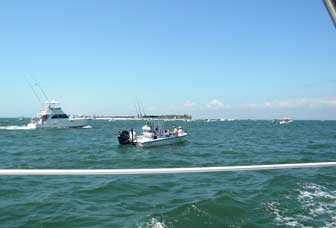 The Saturday of departure was clear with just a few clouds and a five knot northerly breeze as we wound our way out of the Cape Haze/Gulf Cove canal and lock system and made it south through Charlotte Harbor to Boca Grande Pass. A typical May day in South Florida, the temperature was already in the 80s and we were applying sunscreen to all exposed body parts.

Also typical for this time of year, the pass was full of dozens of tarpon fishing boats, all trying to catch the Silver Kings and running back and forth making for a rather interesting exit from Charlotte Harbor. We did escape without landing one (fishing boat) or having to use the horn.

Stepping Off Into The Gulf 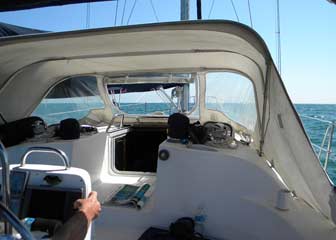 Heading into the Gulf of Mexico, bound for the Florida Keys

Once we had cleared the Boca Channel and headed out into the Gulf of Mexico, it was time to enter our waypoints for the Marathon leg into the Garmin 4208 and bring the paper chart kit up into the cockpit for backup. We set the plotter and linked the route to the Raymarine ST6000 auto pilot. Our first mark, which was off Cape Romano, would come up during the night. 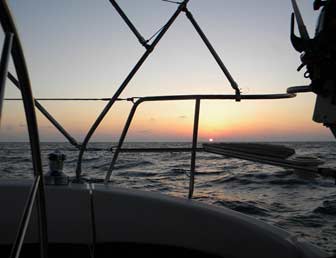 Sunset on the Gulf of Mexico

Now the trip becomes a reality with the coast fading in the east, as we tried the get some distance out to sea in order to miss as many crab pots as possible. With the quality folding propeller this boat had, we sure didn't want to get it fouled in any crab trap lines!

The Raymarine ST60 depth and wind instruments were giving us 25 feet and 12 knots out the the North West. Out came the jib for a bit of night motor sailing. Sometimes this is a problem when the steaming light reflects off the jib, but no so on this boat because the jib is rather small and the light was way up the 60 foot tall mast. Definitely not a mast I wanted to climb if we ran into trouble with gear up high! Seas were a little rolly which keeps you looking for hand holds when moving around in the boat. This is not a place to take a dip in the middle of the night.

Time for dinner, so we thought we would fire up the propane stove. We had asked if the propane tanks were full, and had been assured that one of them was. Mistake one: always check for yourself! Already 15 miles offshore and well into the trip, we had no propane! We could head east into Fort Myers or Naples to get propane, but that could add 8 hours or more to our trip. With plenty of sandwich meats and other food that did not require cooking being kept cold in the Adler Barbour refrigerator, we decided to press on with the delivery, though with somewhat lower crew morale and concern about a source of needed coffee. We could always fire up the generator and use the microwave.

Night sailing off the Everglades was a little rough, with clear skies and very little moon. The Coast Guard was calling on channel 16 about a lost boat with a tow in our area, so we kept a sharp eye out. Lucky we kept an ongoing watch, as one of the large air force towers marked on the chart loomed out of the dark with no light, 50 yards off. This stuff always wakes you up and brings things to mind that “could” happen out there. 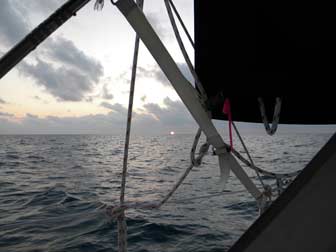 About dawn we made our turn for the charted line to Marathon which would miss most of the shoaling in Florida Bay. This channel has one of the newer bridges with the 65’ clearance that our 60’ mast needed to go out to the Atlantic Ocean side of the Keys. Time for coffee, so we thought we would fire up the generator. Mistake two: always check for yourself! The generator had been serviced, but we did not double check its operation before departure. Our checks before departure had included the equipment needed to safely move the boat, but "crew comfort" items such as the galley stove and generator had been neglected.

We tried to start the generator a few times before discovering the previous owner's instructions. He said it was a bit hard to start, and detailed a procedure involving the insertion of wood behind a solenoid and jumping the battery. Our generator-starting days ended with that discovery. Our hearty crew of sailors could not get far without coffee, so to avert a mutiny we developed a system using the boat's hot water system. This water was heated by an exchanger from the engine's cooling system, so the water is extremely hot, around 180 degrees. We made great coffee for the rest of the trip by just pouring the hot water slowly into an old style coffee pot. 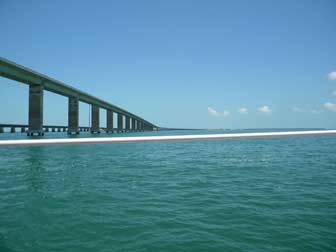 Through the Keys Overseas Highway bridge at Marathon

Through the bridge at Marathon, and we stopped for diesel fuel at a marina near Boot Key. We had been burning about 1/2 gallon per hour with the 35 hp Yanmar engine, and could probably make it to Miami using the extra 5 gallon jerry can we had brought along, but we were going up Hawk Channel and that’s the Atlantic Ocean to me, so we topped off. Another dragon slain for me, as I’d never been on the Atlantic or near the Gulf Stream in a small boat.

As we headed out, the Coast Guard put out a call on channel 16 to notify all vessels that there were large, floating boxes in the ocean, and what they described as "an unseaworthy raft with 4 aboard." We never saw them, and were left wondering how those people came to be in the ocean on an unseaworthy raft. 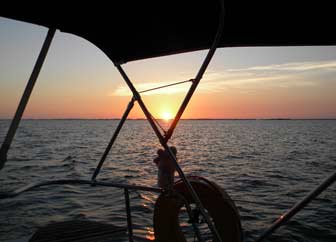 As the sun went down over the Florida Keys, we were making our way up Hawk Channel and entering in our waypoints for the night passage to the channel entrance of Biscayne bay. We planned our arrival just at dawn, as none of us had made that approach before and we definitely wanted to do it in the light.

About midnight the weather started to close in on us, with 18 knots of north wind and steep seas causing the boat to pitch up and down. Again we had the new moon and this time clouds, so the night was very dark, making it very difficult to spot unlighted navigation marks. They seem to pop up quickly on a night like that one! We also had a lot more boat traffic of all types and sizes during this night passage, and some of them appeared to have invented their own navigation light arrangements and rules of the road. 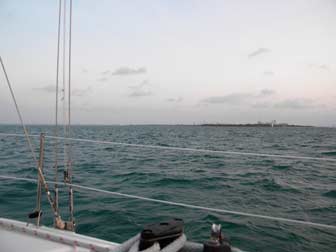 On our arrival at the channel entrance just at dawn, we were greeted by a couple of totally unlighted fishing boats. Another "Ah ha" moment, as a half hour earlier we might have had a fishing boat figurehead. 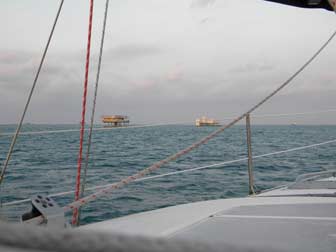 Channel through Stiltsville into Biscayne Bay

We made our way into Biscayne Bay via the channel through Stiltsville, a series of fishhouses on pilings like the ones in Pine Island Sound that we had seen many times. A big surprise to me on the way in to the marina was the number of sunken and derelict boats in the anchorage off Coconut Grove. There are several marinas all bunched together amidst a couple of general anchorages and a large mooring field. We found the Dinner Key Marina after driving around for a bit and asking directions (just like Capt. Ron). 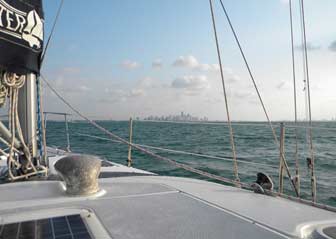 The delivery trip was a good one, with just a couple is issues which we could have avoided with a little more prep time. Total sea miles, just at 300. Total sea time 47 hours. Average speed about 6.3 mph. Sandwiches consumed about 30. No more breakfast sandwiches for me in the near future!

Video from the Hunter 376 delivery around the tip of Florida: