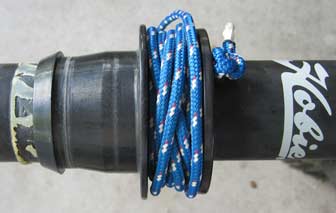 In the course of routine maintenance, I noticed that the furling drum on my Hobie Adventure Island had slipped a short distance up the carbon fiber mast, exposing the glue joint.

I had previously seen discussion of a couple of other people having this same problem on the Hobie Adventure Island forums, so I went there to review how others have handled the problem.

The short answer is quite predictable: you clean it up and reglue it with epoxy!

What follows is the long answer, with pictures... 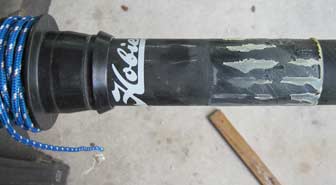 Furler Slid Up Past Epoxy 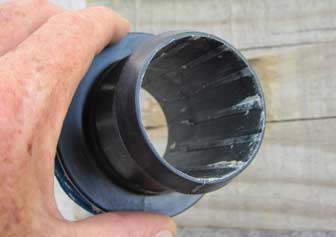 The furling drum has to slide off the top of the mast, so the first step was to remove the sail from the mast. I had a little help from Libby puppy, who managed to avoid stepping on the clear part of the sail.

The furler did not want to let go of the mast. I was able to wiggle the drum a bit and move it up and down, but I could not free it from the mast by hand. I set the mast across a sawhorse and chair and tapped the furler gently with a wooden stake while rotating the mast until the furling drum was free of the glue joint.

Once above the glue joint, the furler slid off the mast and I could see that it has ribs on the inside that appear to be part of the plastic casting. 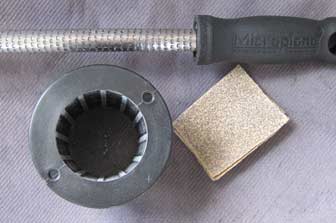 I used a rounded Microplane spice grater and then some rough sandpaper to clean out the excess glue inside the furling drum. The Microplane worked well to shave off epoxy. 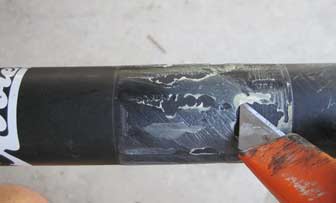 To break the old epoxy free from the mast, I just slid a razor knife under the edge and lifted it off in fragments. Wear protective glasses for this procedure to avoid getting flying epoxy fragments in your eye. 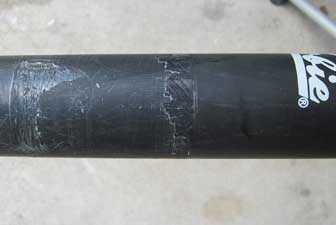 A couple of small patches of epoxy put up such a fight when I tried to get them off the mast that I decided they could stay there instead. Most of the mast was free of glue when I was done, and I think it does not really matter whether the new epoxy bonds to that old epoxy or not — it will be encased inside it either way. 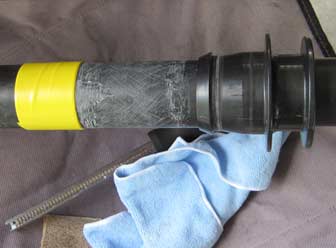 I sanded the inside of the drum and the area of the mast to be glued with rough sandpaper, cleaned them off, then ran multiple wraps of vinyl tape around the mast where the bottom of the furling drum needs to come to rest. With about 6 or 8 turns around the mast, I had a small "base" where the drum could rest while the glue cured. 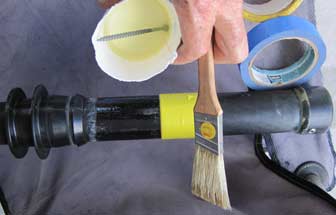 Before sliding the furling drum back into place, I painted the mast with West System Epoxy. I definitely did NOT use one of my wife's good Purdy paint brushes for this purpose. It was some other Purdy brush that had the misfortune to be at hand when I got ready to paint epoxy.

Once the drum was slid back into place against the ledge of yellow vinyl tape, I used blue masking tape to attempt to create a seal between the lip of the drum and the vinyl tape edge. It was not completely successful. 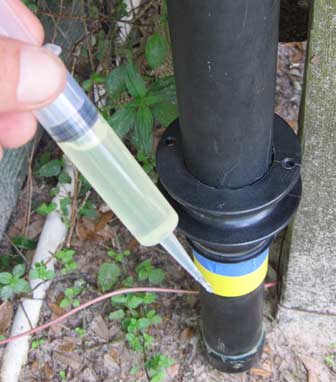 Injecting epoxy between drum and mast

I stood the mast against a tall pole and lightly secured it in place with a bungee so that it was more or less free-standing in a vertical position, then used a West System epoxy syringe to inject the West System Epoxy into the gap between the roller furling drum and the carbon fiber mast.

I did not use any structural fillers to thicken the epoxy and was careful to inject it slowly all the way around the mast. By rocking the drum around slightly, I got the thin epoxy to settle downward while releasing trapped air bubbles. At one point, I was rotating the mast with one hand while injecting epoxy with the other, and noticed that my "other" hand felt epoxy on it! Did I mention that you should wear protective latex or nitrile gloves when working with epoxy?

My blue tape "joint" between furler and yellow tape had failed, and I scurried off to get a shop towel and the yellow tape roll. Only a small amount of epoxy had escaped, so I just wiped it off and took a couple of wraps around the whole thing with the yellow tape stretched tight. With a fresh finger in the dike, epoxy injection could continue. 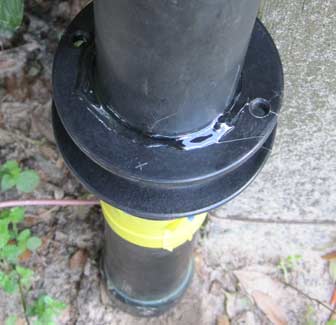 The hardener I used kicked off the epoxy cure a bit faster than I would have liked, especially with my small taping delay, but I still managed to fill the gap between furling drum and mast completely with epoxy. Allowing the mast to stand vertically while the glue cured let all but one air bubble escape, and meant I did not have to do any fancy clamping to hold the drum in proper position, with an even gap all the way around. 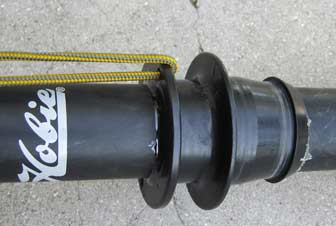 After letting it cure overnight, I put the sail back on the mast and reattached it to the furling drum. So far, so good, as it did not pop free under the downhaul line tension. In the picture you can see a little residual epoxy on the lower lip of the furling drum, probably where my blue tape joint failed. That was easily removed with the razor knife. I will give it another day before testing the furler glue joint under sail. 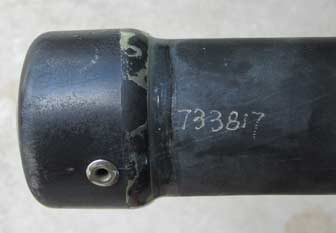 One of the guys on the Hobie Adventure Island forum asked why stainless rivets were not used to secure the furler, like the ones used to secure the mast base fitting. As you can see in the picture (click to enlarge) the epoxy bond has partially failed around the outer lip on my mast base fitting, but the rivets on each side ensure that it will not come off even if the epoxy bond inside lets go. Matt Miller, the long-suffering Hobie representative who answers all of our stupid questions on the forum, said that rivets were not used on the furling drum because of concern that they could crack the mast. The ones on the mast base are not under any great load, but the furler can be under quite a load when sailing under reefed sail. 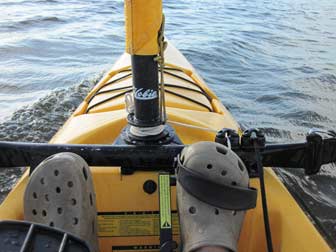 At last got to put the repair to a decent test today, with winds up to 15 knots or so during our evening sail. In the picture, I have partially reefed the sail and am sailing on a reach to put a load on the furling drum. It did not fail, so I'm pronouncing my repair a success!

Some video of our evening sail off Punta Gorda's Ponce De Leon Park: