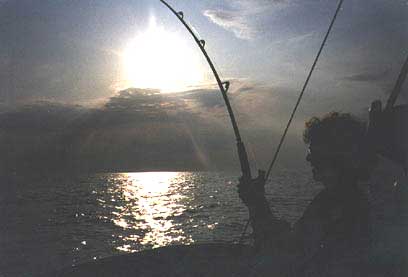 We all gathered up at the dock above the Highway 90 bridge and launched the boat. Mark owned the 24' SeaCraft and Thomas and I worked with him. We had planned this escapade on the hope of good weather and no emergency calls from work, and so far luck was holding. The late September weather was excellent and soon we had the boat loaded and were off. A slight delay on the trip out of the channel to catch some live bait with the cast net was all that hindered the trip. Two hours later we pulled up to the Mr. Gus, an oil rig off the Mississippi coast.

To a coastline that has a lot in common with a desert, the oil platforms are like reefs. Off in the distance we could see the “horseshoe rigs” but that was another thirty minutes running. We'd try our luck here. The navy was playing around with F-18s above as we cozied up to the platform. Just as we tied off to the rig, one broke the sound barrier low above us, and I swear the pressure wave ruffled our clothes. We had to get Thomas up off the deck where he was cussing anything that flies and trying to dig a hole for protection!

The water was as clear as a bell, that deep blue ocean color, and there were thousands of bluefish schooling around the rig. Triggerfish too. And calm seas. I had been worried about that so far from land, but it was perfect, and I sent the double snapper rig to the bottom. Mark and Thomas busied themselves rigging up. I reeled the line back in and checked the bait. Nothing. Wondering if we had come all this way for no snapper, I sent it back down again. Success, as the rod bent double, and two big snapper were hauled up from the depths. I could see their red flash an amazing depth in the clear water. The others joined the fray and we began paying for the trip 40 miles offshore.

We fished and talked in between the klaxon blasts of the rig's fog horn. Thomas got into a huge fight with something but it got into the rig. I could see the muscles in his arms bluged out from the fight and hear the drag screaming before the line parted . He had some choice words and commented he'd have loved to see that one. We caught a few bluefish for fun but they were all small. Something kept eating the snapper coming up and we couldn't catch it.

Finally we decided to count the fish. Not a good idea to be over the limit.

That was easier said than done because the cooler was almost full. And there was a swell now. We drunkenly counted the fish not once but twice, with them sliding over the deck from the wallowing boat. We don't drink out on the water...none of us, but somehow we miscounted and were one over when we recounted at the dock. A HUGE king mackeral jumped nearby. We kept pulling up partial snappers and figured sharks had moved in. I had ached to snorkle but seeing those half snappers changed my mind. Being at the limit of snapper, we decided to troll once around the rig and then head home. There were a lot of fish to clean.

I rigged a cigar minnow with a hook and Thomas put a lure in the water, while Mark manned the helm, and we made a troll around the platform. It didn't take long before we had two small kings in the boat. Thomas swapped out with Mark and we put two more in the boat, and then both of us had a short strike. I had to replace the cigar minnow and played the line out back into the wake. Just as I reached to set the rod in the holder, a nice king mackeral leaped out of the water and took the bait on the way back in. He ALMOST got the rod too...but we idled the motor and got things under control while the fish stripped line. We got it turned and then Thomas exclaimed. “Look!” The king had run towards the bow and we were all working to keep from getting tangled up. I turned the fish and it came roaring astern down deep at the perfect angle. We could all see it flashing down deep in the clear blue water as it came by. It was an amazing sight and showed how clear the water really was. We got that one in and decided it was time...

Mark put the hammer down and we headed for land