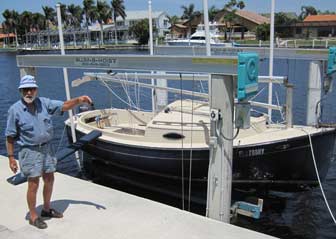 I left the boat business, but it did not leave me!

This is Joe and his Com-Pac Sun Cat, when I went to his house a few days ago to investigate a broken gaff boom. When I worked at a Com-Pac dealership, it was my job to mess with such things, and somehow, it still is. How does that happen? The answer goes back a few years...Back in 2003, I was working for a local construction and home repair firm, mostly doing trim carpentry but at times a bit of almost anything. We went to a job where there had been some roof leakage, causing damage to drywall, and repairs led to the discovery that there was also a termite problem around a front window. The retired snowbird couple who owned the house were very nice people, and I was sorry to see their house in such a mess. The house was on the water in Punta Gorda Isles, and out back I noticed a very unusual boat. I asked the owner about it, and he explained that it was a 19 foot Cougar catamaran, made in England, and he had bought it brand new almost 35 years before! 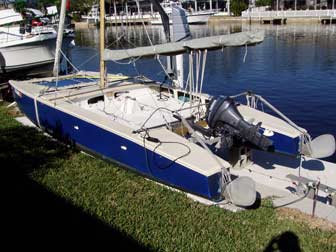 The Cougar Catamaran Catches My Eye

I was intrigued by the boat, and went out to have a closer look. It looked like a Hobie cat, but with larger volume hulls and a hard cockpit instead of a trampoline. The hull and deck were balsa cored, and the rig featured a rotating airfoil shaped mast and roller furling jib. Pretty impressive technology for a 1960s toy boat!A pair of aluminum kick up rudders and aluminum centerboards that retract into the hulls make it a very capable shallow water boat, an important feature in this part of the world. I asked the old guy if he wanted to sell the boat, and he just laughed at me in a friendly way and said he loved his boat and would never get rid of it. I grinned because I could not blame him! Later, I searched the internet and found that there are still a few Cougars in America, but they are very rare boats. I hoped one day I could own one, and took a picture to remember what it looked like, in case I had to build it myself. In the background of the picture is a Carver 32 on a boat lift, all decorated for Christmas.I was already on my way out the door at that job, having found a spot at Punta Gorda Yacht Brokers & Gulf Island Sails to try my luck at selling boats. Before we completed the termite repair, I started my new job and said goodbye to the old guy with the catamaran.

Almost a year later, I was working at the Fort Myers Boat Show, and two old guys came to see our boats for sale. One of them said he was a marine surveyor from Punta Gorda, and the other guy was his neighbor. I told the surveyor that I worked at a Punta Gorda brokerage, and he asked which one. It turned out that I had met him before, and the aforementioned Carver 32 was actually one of our brokerage\'s listings at the time, so he was a client! How embarassing not to recognize him! I still did not recognize the other guy, either.They were interested in the little blue Com-Pac Sun Cat, and I showed them around the boat, which was still brand new to me, as we had just become a Com-Pac dealership. All I could really do was read them the brochure, since I had not yet sailed or even rigged a Sun Cat. 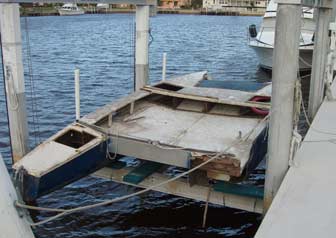 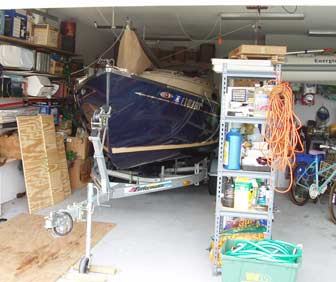 The next morning, as I was on my way down to the boat show, my phone rang. The man said he was Joe, and had been down to see me the day before with his neighbor Bob, the surveyor, and he wanted to buy that little blue boat. Boat sales are usually not that easy! I asked him if he could come back down to the show to make the deal, and in the course of our conversation he happened to mention the reason he was buying the boat. His beloved blue Cougar catamaran had been destroyed in hurricane Charley, and he really liked the blue hull color."I know you! I worked on your house last year! I have a picture of your Cougar catamaran!"How embarassing to not remember him! It was a continuing problem for me in boat sales. I can remember a person\'s boat much easier than I can remember his name. Joe did not remember me either initially, until I reminded him that I was the tall, skinny guy who stood on the seawall talking to him about catamarans when I should have been fixing his house. He bought the Sun Cat from me anyway, but was concerned about a couple of issues. Solve issues, make sales, is the name of the boat sales game.

Joe\'s Concerns and My Solutions

Joe was concerned about leaving another boat out for the summer, and wanted to get the Sun Cat in his garage. He also had no tow vehicle, and did not want the trailer in his garage all winter. Last but not least, there was a broken Cougar catamaran on his boat lift, where he intended to keep the Sun Cat during the winter sailing season."No problem," I said, "I have a truck, live on a farm where you can keep your trailer, and will take that Cougar and its trailer and make them go away." Joe bought the boat, and my first job was to remove the Cougar cat, which I intended to rebuild. We lashed the broken hull atop a block of styrofoam and I slowly towed it away.I looked back to see Joe, hat over his heart, obviously having a painful moment saying goodbye to an old friend. My kind of guy. So began our relationship, in which I see him at least a couple of times a year, when it is time to get the boat out of the garage or put it away for the season.We have to remove the hinged mast from the stub to fit the boat under the garage door, but it stays indoors, protected from the summer sun and tropical storms while Joe is up north. Joe and his wife, Jeanne, are very generous and enjoyable people, and have allowed me to use their dock for my Corsair F-27 trimaran, and have now offered me the use of their boat lift for my Sun Cat while they are away for the summer. That is why, when Joe called me saying he had broken the gaff boom on his boat, I put back on my "boat guy" hat and went to work! 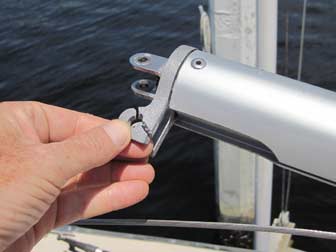 When I got to the house, Bob, the surveyor-neighbor, had helped Joe remove the sail from the boat, and the mast and booms were lying on top of the boat. Joe explained that he had been out sailing, as he does almost every day, and suddenly the Spinlock rocking line clutch that holds the peak halyard had given way and the gaff boom came crashing down, ripping the sail and breaking off the piece of the boom end cap that holds the throat of the sail.On closer inspection, I found that the Spinlock was working just fine, and Joe said he had not snapped it down properly. I admire Joe because he is in his 80s, but still goes out almost every day in this boat all winter long, and has done so for the past seven years. I was surprised that he could make such a basic mistake, but I guess the years catch up with all of us at some point.

I contacted the sales manager at Gulf Island Sails and Gerry Hutchins of Com-Pac Yachts by email to inform them of the problem and ask about a replacement cap. Gerry replied that he had one in stock, and the cost was $29, so it was sent to Gulf Island Sails. The original cap was riveted onto the gaff boom with stainless steel rivets, but I decided to attach the new one with stainless screws instead. The replacement cap did not come with any attachment holes, but I had a 10-24 size tap and matching drill bit left over from my Sun Cat rig modifications project, so I just had to stop by the hardware store and pick up a couple of screws when I dropped by the dealership to pick up the new end cap. 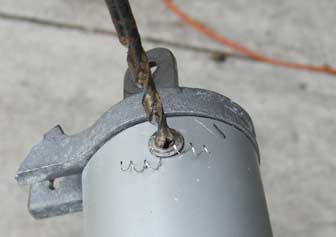 This is one good reason to use screws instead of stainless steel rivets: if you have a problem, you have to drill out the rivets to fix it. I hunted through my drill bit collection to find one that looked like it would drill out only the rivet without unnecessarily enlarging the hole in the aluminum gaff boom extrusion. I guessed right, as the drill removed just enough from the center of each rivet to break free the outer cap with gentle prying. 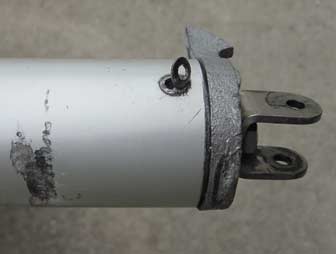 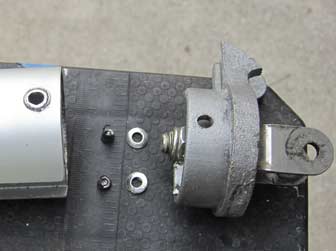 With the tops removed from the rivets, it was easy to punch them through and remove the broken end cap from the gaff boom. Click to enlarge the picture and you can see the drilled-out remains of the stainless rivets. 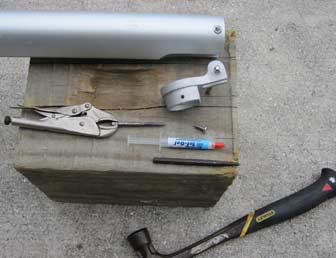 I put the new end cap on the boom and marked a drilling spot using a metal punch. The metal used for these end caps is pretty soft, so drilling a hole was easy. Finding my tap holder turned out to be much harder, and I ultimately gave up and decided to freehand the threads using small Vise Grips to hold the tap. After tapping the threads in the first hole, I temporarily screwed the cap in place on that side before giving the other side a whack with the punch to mark the second hole.With the second hole drilled and tapped, I removed the stainless jaw fitting from the broken end cap and put it on the new one, coated the screws and the lip of the end cap where it contacts the boom with Tef Gel to inhibit dissimilar metals corrosion, and put the new end cap on the gaff boom. 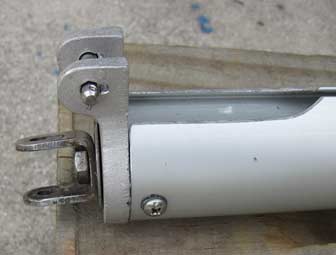 With the new cap in place, I returned to the boat, bent the sail back on the booms and mast stub, and raised the sail briefly with the boat on the lift. It was too windy to leave it up, but we got it raised enough to see that everything was clear and back in place with no tangles.Joe\'s boat is ready to sail again, but that will have to wait as it is going in the garage for the season in a couple of days.', 'Replacing a Broken Gaff Boom Cap', 'When my buddy Joe broke the end cap on the gaff boom on his Sun Cat, he asked me to fix it for him.

Newer: An Adventure Island Kayak Sail in Shell Creek During the Fringes of Ike
Older: Sailing the Sun Cat with Puppies 2010