You are here: Home / Boating Fun / An Adventure Island Kayak Sail in Shell Creek During the Fringes of Ike 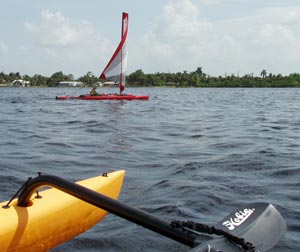 We decided to take our Hobie Adventure Islands out while Hurricane Ike was thrashing Cuba.

As Hurricane Ike made its way along Cuba, we got some strong east winds in this part of Florida. All the rain was quite a ways south of us, so we were guaranteed great summer sailing conditions with no thunderstorms. We decided to sail to the reservoir dam about a mile up Shell Creek from our neighborhood boat ramp. The creek runs more or less east-west, so we would be beating upwind in our Hobie Adventure Island trimaran sailing kayaks. I shot this video of our tacking duel up the creek:

The Hobie Adventure Island is well suited to sailing upwind in a tight creek because of the Mirage Drive pedal power system. The wind swirls around the corners of the creek and there are relatively calm patches, even with the strong prevailing winds caused by the hurricane. In the calm places and when tacking, a few pumps with the Mirage Drive allow the boat to maintain speed. Greg Ketterman is a genius. In addition to designing a great many boats, he has made the paddle obsolete.

On most trips in the Adventure Island, I use my paddle only to back up and to scrape the telltales off the sail when they get stuck. In no-wind conditions, it is easy to pedal the Adventure Island at 2 knots. Paddling it at that speed requires a lot of effort. For a graphic demonstration of the power of the Mirage Drive, watch the video of a Mirage Drive equipped kayak towing first one and then two Olympic paddlers backwards in a tug-of-war.

It's amazing to see the long-time king of small boat propulsion, the venerable paddle, rendered obsolete. I had seen little pedal drives using propellers and paddle wheels on various boats, but all were slow, cumbersome, and prone to maintenance problems, especially in salt water. A paddle was just all-around better, and the main reason was power. Now we have a durable and powerful drive unit that can propel kayaks to much higher cruising speeds with less effort, virtually no noise, and best of all, hands-free. It can stand up to salt water use, and while it is not as reliable as a paddle, failures are rare.

Combining the power of the Mirage Drive with the 57.5-square-foot sail on the Adventure Island trimaran makes for a very speedy kayak. As you can see in the video, the carbon fiber mast flexes in gusts, spilling wind off the top of the sail and depowering itself without any adjustment of the mainsheet. We were sailing at 3 to 4 knots upwind, and even though we were fighting a bit of current, we could make good progress.

Powering Through Tacks With the Mirage Drive

A great part of that progress is due to the use of the Mirage Drive when tacking the boat, which allows us to simply steer through a tack with very little loss of speed. The boat gets established on the new tack with 2.5 knots of speed, and will accelerate under sail. If you happen to tack into a lull, just keep pedaling until you get back into the wind.

It is usually easy to see the calm spots where the wind is coming around a corner. Just look for the smooth water and avoid it. Toward the end of the video above, that became impossible. We were approaching the dam, and the wind was blowing unrestricted across the reservoir and then continuing straight across as the water fell a few feet down to our level in the creek below. The surface of the water was completely glassy, but we were sailing in enough wind to almost bury the lee ama in the gusts. It was impossible to tell how it was swirling down the edges of the creek, so tacking at the edge could land you in a little calm spot, then the current could carry you backwards into the shore.

Since it did not really feel like "working" our way upwind as in a conventional sailboat, having cheated our way upwind we got to enjoy the downwind run back to the boat ramp:

The GPS shows that I had the boat running at 5.1 knots, with acceleration to a sustained 5.4 knots. There was about half a knot of current helping us along, and we averaged over 5 knots the whole way back. A couple of times my GPS was showing speeds above 6 knots, and I almost caught it in the second video clip, but by the time I got the GPS up to the camera, it was showing 5.8 knots and falling. I decided to try to gain back some speed by turning onto a reach, but did so a bit soon.

The noises toward the end of the video are my daggerboard hitting clam shells in the mud as I cut a little too close to a shallow point. Fortunately, the mud is soft and Adventure Island daggerboards are much stronger than they look, so my board was not damaged.

It was a pretty quick trip back to the ramp, and we considered sailing some more, but decided we had had our fun, sailed fast in the gusty winds on the edge of Hurricane Ike without breaking anything, and should not push our luck. A quick afternoon sail is easy to justify in a boat as easy to trailer and rig as an Adventure Island. A few minutes later we had the boats on the trailer, masts down, and were on our way back to the house.