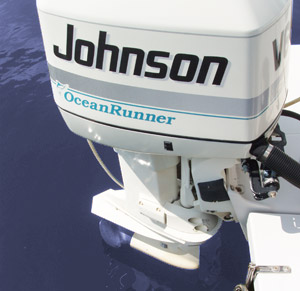 When it's time to replace your old outboard, your local dealership will properly prepare your new outboard engine for salt water use.

When you buy a new outboard engine, the dealer should perform a Pre-Delivery Inspection (PDI) on the engine. On modern four stroke engines, this means filling the engine with oil and firing it up to check idle speed and throttle and shift linkages for proper adjustment, then going over the operation and maintenance of the engine with the customer. You can order some outboard engines online for very good prices, but can you just read the manual and use it straight out of the box? Yes, in many cases you can, but...

The engines come with various linkages already lubricated with grease, which is great. However, if you look at most of them, it appears that the person applying a dab of grease to each fitting might have been talking to the person next to him in the factory at the time. There's a glob of grease on the appropriate fitting, but it is hanging off one side and not really worked in to the moving parts. An observant dealer will spread the grease into the fittings and linkages and then wipe off any excess, especially if the engine is to be operated in salt water.

Outboard engines with electric start and remote control will have wiring harnesses inside to control the ignition and the electric choke. Those should also be checked carefully for proper installation by the factory. At times, one or more of the waterproof connectors is out of place and will chafe the wire against the engine, or is improperly shoved together, bending the waterproof covering and rendering it useless. The engine will operate normally, but the lifespan of that connector will be reduced. A good dealership will check anything electrical on a new outboard engine to ensure that the factory has not made any errors which might reduce the lifespan of engine electrical components.

I have seen quite a few outboard engine covers with damaged gaskets over the years. Usually, the owner has not lowered it onto the rim of the lower engine cowling correctly, and the rim has cut into the gasket, deforming it and defeating the waterproof seal. Every engine is a little different. Some tend to want to catch the gasket and fold it inside the front side of the engine, some don't line up along the sides, etc. An improperly placed engine cover will not only damage the gasket, it may allow the engine to get salt water inside the cover. A good outboard engine dealer will demonstrate the proper removal and replacement of the engine cover to the customer.

Small outboards that clamp on the transom of boats tend to eventually suffer from corrosion of the outboard engine clamps, especially if the engine is to be operated in salt water. Factory technicians put a glob of grease on these as well, but only on the coarse threads, and they don't distribute it evenly down the threads. A good dealership will treat the end cups on one end of the clamp shaft and the handle on the other with corrosion inhibiting oil or grease, and work the grease into the threads of the clamps.

All outboard engines are subject to the effects of corrosion, especially in salt water. The salty air condenses on the metal components, and when the droplets evaporate, a little bit of salt remains. It permeates everything. If your engine will be in salt water, the dealer has a opportunity to pre-treat the vulnerable components of that particular make and model of engine BEFORE the engine is used in salt water and exposed to the salty air for the first time.

Knowledgeable dealers will know which engine parts are prone to corrosion, and will treat them with corrosion inhibitor before delivery to the customer. Those treatments need to be repeated over time, so it is important that the customer learn from the dealer which parts to monitor and treat and how to do it properly. I have an 18 year old outboard and a 21 year old outboard, and both have minimal corrosion despite being used in salt water, because both have been properly cleaned and flushed after each use and both are treated annually with heavy grease on the areas that need most protection, and a general fogging of the engine with corrosion inhibitor once a year.

Almost every outboard engine has a nut on the bracket where the shift rod passes down toward the gear case, and salt water engines which are a few years old usually have a rusty nut. The engine mounting bolts down in the cowling tend to catch a little salt as the aft part of the engine takes waves in following seas or when slowing down. The lower section of the engine powerhead can get splashed with salt water as well, and parts will corrode if not properly treated with a good corrosion inhibitor. Online outboard shops will tell you that engines run great right out of the box. Well, yes, they usually do, and if they do not, the manufacturer is responsible under the warranty.

But what will happen to that engine in a few years? If a novice customer takes it out and uses it in salt water, even if he carefully rinses and flushes the engine's exterior after each use, it will show considerably more corrosion than the same engine that was properly prepared for the salt environment by a knowledgeable dealer, especially if the customer has followed recommendations regarding the parts that need special care.

Modern outboards are very resistant to rust and corrosion, but each of them have vulnerabilities, and there are some weaknesses common to every brand I know. A good outboard engine salesman will know the weaknesses and vulnerabilities of engines sold at his dealership, and will prepare the engine to survive in the long term, as well as spending the time with each customer to ensure that he knows which parts to watch, how to protect them, and how to avoid common mistakes made by people who use an engine right out of the box without even reading the owner's manual.

Experienced buyers can sometimes save some money buying an outboard engine online, and can easily (albeit illegally) evade the State of Florida sales tax, and they might know how to prepare and protect the engine in the salt environment. If you have not outlived a few outboard engines in salt water, and seen what eventually corrodes and rusts away and why, you may benefit from having a dealer check your engine for proper assembly by the factory, protect it thoroughly from the effects of salt exposure, and brief you on what must be done over time to maintain and protect the engine. The owner's manual and even the service manual for any outboard engine will not contain some of the ugly facts about the bad things that happen to good engines in salt water.

The manufacturer's Pre-Delivery Inspection is viewed by good dealerships as the beginning of the preparation for the engine to enter salt water service, not the end.

Newer: Hobie Mirage Adventure Island: His Review
Older: Blown Down in a 44′ CSY