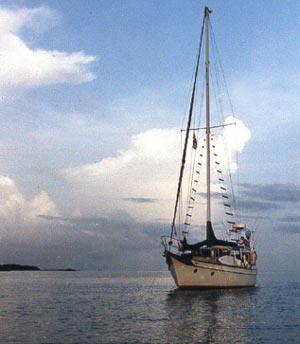 Yes, this CSY 44 was knocked down in a rain squall

The CSY 44 is widely thought of as a tropical tank, overbuilt for heavy use as a charter sailboat, and practically indestructible. Although the ballast to displacement ratio is fairly low for oceangoing vessels, the sheer mass of the boat makes it less susceptible to strong winds and waves than other similarly sized cruising boats. I routinely carried full sails in winds above 20 knots, with good control of the boat and no excessive heeling.

So, is it possible to be knocked down in a 44' CSY? Yes, it absolutely is possible, and I have done it. Just like the other times I've been blown down in a large sailboat, I was asking for it.

We were cruising from Little Harbor, Abaco, down to Whale Cay in the Berry Islands to meet up with some friends. It was early August, and the ocean was fairly calm. We were sailing along downwind at about 4 knots most of the time, an acceptable speed, but we were eager to get to our destination and see our friends.

There were small rain squalls sweeping from East to West across that area of the Bahamas. None was very big, and I had seen no lightning, so I was having a little fun by dodging left or right of our course line as needed to catch a ride on the passing storms. We had a radar and Sat Nav, so it was easy to track and anticipate the movements of the storms, and I was not too worried about the effects of our course deviations on our ability to navigate to our destination.

The first couple of squalls were a raging success. We got up above 6 knots for a while, the boat got a nice freshwater rinse, and the crew enjoyed a refreshing natural shower in the cool gusts, a nice change from the stifling August heat of a downwind run in light air. I saw another storm approaching astern; the radar revealed that it was not too intense, but was fairly large, and centered to port of my course line. I decided to turn across the wind and reach over into the path of the storm, then turn back downwind just in front of it to catch a ride.

As the storm got close, I could see that I was not quite going to make it into the center of the path of the storm, but I could at least enjoy the breeze coming off the edge of the storm and get hit by part of it. As a side note, the boat's speed record as recorded on the ship's knot meter at that time stood at 8.0 knots, achieved earlier in the year by a friend on a reach along the Florida Keys. Running downwind with the storms, I had gotten her up to just above 7 knots, but no more. I'll be honest and say that I wanted to hold the boat speed record on my own boat.

That is how I came to enter the edge of an approaching and growing storm under full sail and trimmed for a beam reach. What an idiot. What came next is exactly what experienced sailors would expect: a very strong gust came along. Instantly we had way too much sail up, and it was trimmed in far too tight. The 36,000-pound CSY 44 instantly buried her rail and began charging along on her side, water splashing against the cabin windows, and rounding up uncontrollably.

I heard several mighty crashes from down below, along with a yell of protest from a crewman who had the misfortune to be below at the time. The 150% Genoa was dragging in the water, and the shrouds were not far above the surface as the boat spun on her side into the wind. I was clinging to the helm for dear life, but I did take a moment to look at the boat speed indicator. 8.8 knots! Woo hoo! Victory was mine! Does it count for the speed record if you're blown down and rounding up out of control at the time? Well, maybe not.