You are here: Home / Boating Equipment / What Use Is A Dead Trolling Motor? 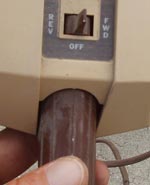 This old trolling motor didn't work. No surprise there.

I have wanted an electric trolling motor for my 15' Boston Whaler for some time, but never wanted one badly enough to buy one and figure out how I would get power to it. I'm very attracted to the new Torqueedo motors which carry their own power supply. Power will be a problem on my boat, both because I have one battery and no good way to rope start the engine, and because getting power to the motor from the boat battery will be problematic.

Because my battery is underneath the console, it is about as far as it can be from the transom and the bow, the two possible locations to mount a motor. If I just clamp a trolling motor on the transom, it would be easier to install or leave behind and a little easier to run the wires, but it would be difficult to control it back there, especially if the stern of the boat is loaded with my homemade livewell and a cast net, as it usually would be on a fishing trip.

When the boat is loaded and I go back there, the motor well starts to drain into the boat! On the other hand, if I mounted a real trolling motor up on the bow, I would have that thing sitting up there all the time, interfering with docking and beaching and generally getting in the way and getting exposed to the salt water, even if I was not fishing. Running wires from the bow to the battery would be hard to do in a neat way, as there is no conduit of any kind through the foam-filled hull. 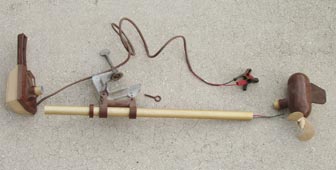 The shaft and clamp of this old trolling motor will make a fine rudder assembly someday.

I didn't know if it was even designed to run on 12 volts, but I figured a free motor is better than no motor, so I might as well try it out. I hooked it up to the battery on my truck for testing, and was not surprised when absolutely nothing happened. No spark, no click, no response whatsoever when I moved the little power switches.

I was carrying it toward the trash can with a grimace, wondering whether it would fit inside, when I started looking at the transom clamp mount and the shaft with its adjustable ring for controlling motor height. It had a pin and hinge, so the engine could be tilted to a higher angle or tilted all the way up if desired, and it was really a pretty simple and sturdy design.

I immediately found myself picturing a rudder blade down at one end of that shaft and a tiller mounted on the top. A nice, height-adjustable, rake adjustable, clamp-on rudder that could be used on any little sailing dinghy I might at some point build or buy in the future.

I took a detour to the shop, got my hacksaw, and chopped off the drive unit from the bottom of the shaft and the control head from the top. I was left with two pieces that are easy to throw away and one future rudder assembly. It will be stored in my shed until I come across the right boat. If I never come across that boat, people will eventually sort through my stuff when I pass on, and it will be one of many things that make them wonder, "What in the heck did he think he was going to do with THIS???"