You are here: Home / Boating Fun / Small Boat Cruising Without A Plan

A Boating Misadventure in the Florida Keys

Most people do not undertake to go cruising in small open boats, but teenagers will do anything. One summer, my brother John and I decided on a whim that, since we had the time and we had a boat, we would take our Boston Whaler from Miami to Key West. That was the extent of our planning.

We loaded a bunch of clothes and fishing tackle, dive gear, water skiing stuff, and a cooler full of drinks and sandwich makings. Our plan, such as it was, was to go south until we ran out of daylight, then camp aboard the boat for the night and strike out for Key West the next morning. We were carrying 18 gallons in the little 15 Boston Whaler, enough to go most of the way, but not quite all the way.

We set out down Biscayne Bay, through Card Sound, Barnes Sound, Blackwater Sound and Jewfish Creek, and out into Florida Bay. I was following the channel markers and jumping over the shallow flats if they were in my way and looked deep enough. I had been in those waters before, and while I was not familiar with the whole route, I was confident I could find my way visually and the shallow draft of our little boat would keep me out of trouble.

Camping Aboard a Boston Whaler

That evening, we stopped at a little group of islands called the Cowpens, just outside of Tavernier Creek. We had spent time there as kids, and knew it was a good place to catch dinner and anchor for the night with some protection from waves and insects out on the nearby shallows.

We caught a couple of small snapper, and my brother brought out his little camp stove contraption. It was a pressurized white gas burner, designed for use at high altitudes on rocks, where there is nothing flammable around. It scared heck out of me having this unstable little stove roaring away on our small boat, not far from the fuel tank, but he successfully cooked our fish, and it was good. We drank a little rum and slept on cushions and life jackets spread around the bow of the boat. A tired and slightly drunk teenager can sleep almost anywhere, so it wasn't too bad, but I wouldn't do it today.

The Second Day of Our Little Cruise

Early the next morning we headed on down the channel. We couldn't resist diverting to explore around some of the little islands of Florida Bay, and going over to the bridge and the various inlets to the ocean side to see what we could find. We stopped fairly early that morning in Islamorada on Upper Matecumbe Key, to take on some fuel. We had enough to make it the rest of the way to Key West, if we didn't go too far out of our way. We could always see the powerlines and radio towers along US1 as we hugged the shore on our way down. The channel runs out in some pretty open water, so we just stayed near to land and avoided the shallow water visually.

Once we got down to Bahia Honda Key, there was a choice to make. We could divert well to the north to get around the islands, or we could go through to the ocean side and take a much shorter, but rougher, ride down to Key West. We chose to go the inside route, which I only remembered vaguely. I knew that if you kept going with land on your left and the Gulf of Mexico on your right, you would eventually find Key West, so that was my plan.

Well, when you get out into those little islands, it gets a bit more confusing. Large, shallow flats are everywhere, and not well marked at all. The islands are large enough that we lost sight of the powerlines and towers, so we couldn't tell where we were. There was no one around out there, and I kept wandering all over the place, trying to go around vast areas of shallow water and figure out which way would take me to Key West. All my wandering was cutting into our scanty fuel reserve, and we might not make Key West if I couldn't find the correct route. I also began to realize that it would have been a very good idea to bring some marine charts along on this journey.

We spotted a fishing boat headed in one of the wider passes, and decided he must know where he was going, so we followed along. We followed him through one of the passes in the area of Summerland Key, Cudjoe Key, Ramrod Keys, or some such place. I can't recall where we landed, but I do remember what happened next. 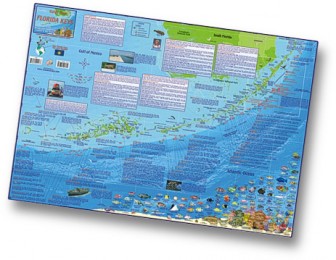 We used a restaurant placemat chart like this one to find our way.

We found a little fuel dock/restaurant, and while they did not have any marine charts for sale, they did have those little paper placemats common to tourist restaurants, which show a kind of cartoon rendering of where you are, along with points of interest and businesses in the area. I grabbed one of those placemats, and I had my new chart. All I really needed to know was the general shape and size of the large islands we had yet to go around, and I could figure out the rest visually.

We made it on down to Key West with our placemat chart without further incident, and we decided to anchor the boat off one of the hotels on the Atlantic side shore of the island. It was unprotected, but what the heck, it was summer and usually calm. We got a room and stayed in Key West a couple of days. I don't remember what all we did, other than having a vague recollection that it was fun.

We were paying little attention to the weather, but we had heard of a tropical storm brewing out the Atlantic and approaching the Florida Keys, so we knew we should leave the next day. What I had not anticipated was just how far out the storm winds extended from this particular storm. It began to get windy that night as we slept, and I had a rather rude awakening the next morning.

I was sleeping comfortably when John burst into the room yelling to me, "Get up! Get up! The boat is in trouble! You have to get up now!"

The Boat Was in Trouble, All Right

During the night, the large waves coming off the Atlantic had pulled our boat's anchor loose, and it had dragged down the shore half a block and nearly washed onto a rocky seawall near the Southernmost Point monument. Some stranger had seen this happening, and was fending the boat off the seawall when my brother happened upon the scene taking his morning walk.

I put on a swimsuit, grabbed the boat keys and shot out the door barefoot. When I got down to the boat, it was in grave danger of chewing itself up on the rocks. I thanked the stranger who had saved it profusely as I fired up the engine. I never did get his name. (Note to stranger: If you happen to read this, I still appreciate your generous assistance.)

I took off into the heavy chop. The wind was probably about 20 to 25 knots, with large waves in the shallow area near the beach hotel dock which were cresting whitecaps and threatening to break as they approached. John went back to the hotel to gather our stuff. What ensued was the craziest boat loading procedure you have ever seen.

Never Load Your Boat This Way

The hotel dock's lower section was at the right height for dinghies and small boats, but the waves were ferocious, and there was no way to tie the boat to the dock. The wind was driving the waves onto the dock, and we didn't have fenders big enough to deal with the loads. Instead, I would carefully surf a wave in toward the dock, slamming the engine into reverse and throttling up as I approached.

With the engine screaming in reverse and waves breaking over the transom, I would come to a stop just outside the dock, and my brother would jump aboard with a load of our stuff. I would then swing around into the wind and head out a bit, often dipping the bow below the cresting waves, as my brother scrambled to stow the gear.

We would then do another surfing/reversing approach, and he would leap off to go and get another load. On his last load, he carried our rum supply inside a water skiing vest, and he lost his footing as he came aboard. He was careful to avoid breaking the rum bottle but he did land squarely on his ass, getting a painful bruise.

And off we went into the raging chop blown up by the 25 knot gusts on the edge of the tropical storm, each bounce causing him to wince in pain.

I was in a hurry to get some distance between us and that storm, so we took the ocean side up to Bahia Honda, then cut into Florida Bay, which was not a whole lot more calm than the ocean. The chop was vicious, and the angle of the wind was perfect to blow spray back onto us on the bigger waves. It was a pretty miserable ride for me, and I didn't even have a bruised butt. I was doing everything I could to stay in protected water, and at one point I cut across a shallow rocky area and hit pretty hard with the skeg of the engine. I was lucky it was not just a bit more shallow, but we got through with only a minor dent in the skeg.

I had bought a real marine navigation chart down in Key West, and it clearly showed that the place I was going was going to be shallow and rocky, but it also showed it was a much shorter route, stayed in protected water, and took us right to a fuel dock we needed to visit.

As we got to the northern Keys, we were able to stay in protected water the rest of the way up, and had a nice ride all the way back to Miami. It's good to be prepared when you go small boat cruising, but sometimes it's even better to be lucky than to be good. We were lucky none of our antics resulted in serious damage to the boat, or worse, but it sure was fun!