Never Let Go of the Boat

Not Even for a Split Second 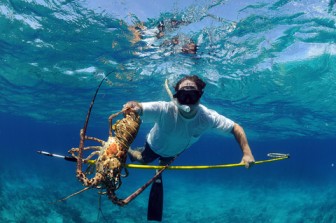 We were spearfishing off the Berry Islands.

A group of us had gone out spearfishing off the Berry Islands in my friend's inflatable dinghy. I had left my swim fins in our boat. No problem, I would stay in the boat and pick up fish as the others speared them. Someone had to do it.

Someone speared a grouper and lost it in a hole, and soon the whole gang was trying to get it out. Circling around the divers, I just had to see what was going on, so I put on a mask and jumped in the water. I was holding on to the boat and watching the action below, and as the boat shifted around me, I went to change hands. At that moment, a little swell grabbed the boat and lifted it away from me. Winds were about 10 to 15, with the occasional whitecap, and that little boat just took off, with me in hot pursuit.

I was on swimming and water polo teams for years, and this incident was 15 years ago — I was young and fit. I knew how fast I could swim on a sustained basis, and started swimming at that speed. I was not gaining on the boat. I turned it on and began sprinting. I was closing, but slowly. With my last energy, I thrashed out the final strokes at top speed and grabbed the lower unit of the engine and pulled. It was not locked down, and started to tilt up! I was losing my grip as I got my other hand on just above the cavitation plate.

Just before that happened, my friends had extracted the grouper from the hole. Now they were swimming around in the bloody waters just over the scene of the biggest shark attraction for miles, one of them holding the fish above his head. They were yelling for me to come and get them. I was breathing hard and scared to death, and still had not gathered the strength to climb in the boat. They had not seen the desperate sprint, and thought I was just letting the boat drag me along as I was sightseeing.

I finally got in the boat and went back to pick them up. They were pissed until I told them why I was so late getting back, then faces fell as they realized how close we came to losing the dinghy and possibly my life. We weren't that far from shore, and if I hadn't caught the boat, they would have been able to swim in easily. I was sprinting away from shore, so who knows what might have happened to me.

I just let go of the boat for a second, to change hands. I didn't put out the floating stern line because I wasn't going to let go of the boat. Never let go of the boat, even for an instant. Put out a line, and tie it to yourself. Most boats can be blown by the wind faster than you can swim, especially if you forgot your swim fins.