You are here: Home / General / Trail Camera Pictures / A Hawk, A Bobcat, And A Naughty Dog 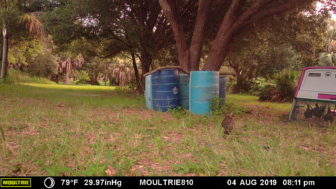 I'm not sure if I keep seeing the same hawk or if more than one of them is trying to figure out how to break into our Eglu coop and have a chicken dinner. Either way, glad the coop and the run extension that I made seem hawk-resistant. 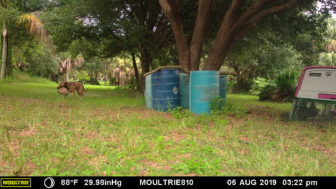 There is a thriving population of gopher tortoises on our property and on neighboring ones. Some of them make the mistake of wandering inside the "doggy zone" that is enclosed by an Invisible Fence. Our dog, Libby, grabs them and carries them off to a quiet place where she puts them upside down and guards them. She knows I will take them away and release them so she tries to avoid me, which tips me off that something is up because she's my shadow. 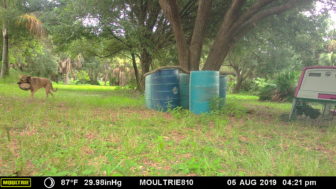 I don't know what happened to this one because I never found her with it. I guess she lost interest and it escaped because I haven't found a dead one. The weird thing about this is, the game camera often catches her carrying one but I have never seen it capture her carrying it again an hour later. I'm guessing that's the same tortoise and it escaped and did not quite get out of her turf before being caught again. 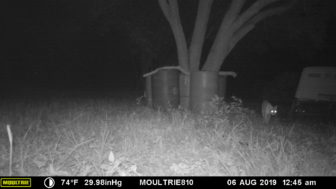 The local bobcat is still around and still has not figured out a way into the Eglu coop to get a chicken. 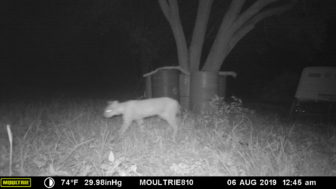 This one is further proof that the game camera's flash and noise are not noticeable to bobcats. The previous version of this Moultrie camera had a visible flash and a moving camera carriage that made noise and a second shot like this one would always show the animal looking right at the camera. That bobcat seems oblivious. 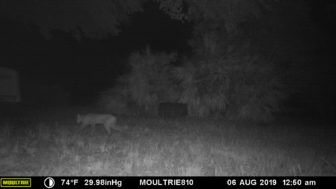 And a shot of the tail. No, it's really not a panther.