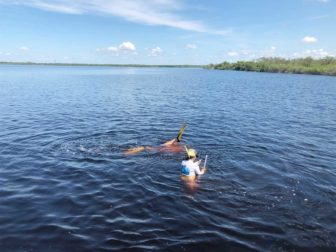 After reading a good article on upcoming seagrass and scallop surveys in our area, I decided to volunteer. Yesterday we took Florida Sea Grant Program extension agent Betty Staugler out on our pontoon boat and had a look at a few of the areas being surveyed near the Myakka Cutoff, along Charlotte Harbor's West Wall, and in Tippecanoe Bay in the mouth of the Myakka River.

We examined the area within a small grid that was placed every ten meters along a 50 meter piece of rope to see if there were seagrasses, what kind(s), whether they had epiphytes growing on them and what kind(s), and what kind(s) of macroalgae were present. The water was warm and it was a glassy calm summer morning, so conditions were generally benign (meaning no thunderstorms) but the visibility was poor. We were asked to classify it as "cloudy" or "murky" and Betty explained that "murky" means you're surveying using the Braille method. I could barely see to the ends of my arms, which is just a weird feeling to me because I'm used to diving in the Bahamas or the Keys, where anything under 20 feet is considered poor visibility.

In the picture, I'm attempting to get my face close to the grid on the bottom in about 3' of water while Betty measures the depth of the survey site. We only found a couple of patches that were completely devoid of any seagrasses at all. In many others, coverage was thin but present. I don't have a frame of reference to know what that means in terms of the health of the areas studied.

Fishermen know that grassy bottoms have a lot more fish than areas of bare sand or mud. For those who don't know or who wonder how individuals can help, read this article by Betty Staugler.

Newer: Pond Swim With Grandkids
Older: Hawk Got Another Squirrel