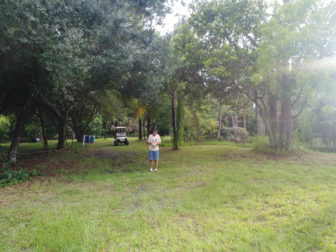 I took my first solo drone flight this afternoon and found that the DJI Phantom 4 is very easy to fly. I also found that I kind of need a savvy camera operator as a sidekick. I set cameras to "automatic for idiots" mode and that's about all I know to do. This one requires a bit more knowledge. 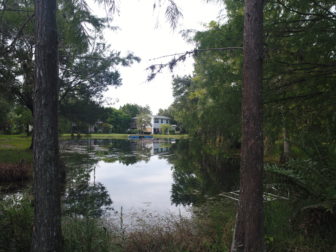 I flew over by the pond and tried to go between two cypress trees and fly out over the water but the drone seemed to think it was too tight a squeeze and refused to go through. I guess I could have switched to "Sport" mode and disabled the collision sensors but figured that might not be a good idea on my first flight so I just took a picture. 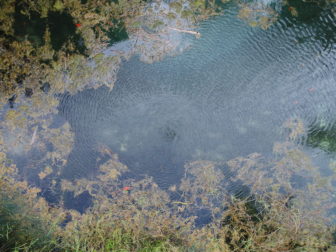 I hovered over the pond spring, hoping to catch its lava lamp-like appeal, but some surface algae had blown down into that part of the pond. The drone's propwash blew some of it away and made a funny looking pattern in the water. I think I need to try again with the sun high overhead and the drone a lot higher off the water.

I'm not sure what was going on with the video files. I played them on Quicktime and they were very choppy, as if hundreds of frames were missing, then it would resume briefly, then skip some more. I thought that perhaps it was a Quicktime thing so I imported a file into iMovie and just made the whole file into an unedited movie. When I played it, it looked the same as it did on Quicktime, all chopped up. I figured perhaps I could ask the guy who sold me the drone, since he's a professional, so I uploaded the file to Vimeo. It looks nice and smooth. Vimeo didn't create missing frames out of nothing, so the whole thing is there, but just won't play properly on iMovie or Quicktime. Oh well, so much to learn. Here's the rather uninteresting video. Yes, there's a sailboat mast on some barrels in my yard. I'm that way.