You are here: Home / Sailing / Wing Sail on a Hobie Bravo 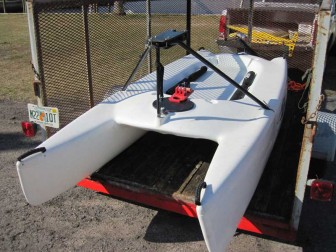 Early in March 2013, I got a call from Chuck Taylor of X Wing Sails asking whether I would help him test out a wing sail on a Hobie Bravo. He had been helping us remove the boats from the former site of the Charlotte Harbor Community Sailing Center and is working on ways to re-open that organization in a new facility. Moving the Sailing Center boats out to our property, it probably came to his attention that I have a driveway full of trailers and he does not have a trailer for the Bravo. I am interested in his wing sail project and agreed to loan him my yard trailer and help with an on-water test of his Bravo wing sail rig.

At top right is the Hobie Bravo loaded into my yard trailer. Chuck had built a new mast step onto the deck, complete with blocks for handling lines to control the aft part of the wing and an extension to the mast brace tripod used on the conventional Hobie rig. The purpose of these was to move the wing aft a foot or so from where the Hobie rig is mounted on the boat and the purpose of the on-water test was to determine if that was the right location for a wing sail. 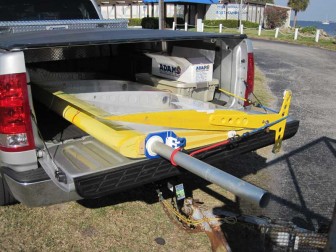 Chuck has several wing sails he has built in his shop and the chosen one for today's test was one of the early ones made for a Sunfish. It was too small for the heavier Bravo catamaran, but should at least answer the main question of the day about the center of effort of the wing. It also fits easily in the bed of his truck, as shown at left.

The ribs of these wings are made from styrofoam sandwiched between 1/4 inch layers of plywood. The leading edge is wrapped in aluminum and the "T" shaped control yoke on the aft wing section, along with other areas under more stress are built out of half inch plywood. The mast is an old Sunfish mast. The clear plastic coating is surprisingly tough! Chuck showed me (on a test piece) that you can hit it hard and it does not rip. It is somewhat vulnerable to sharp objects (he let me puncture the test piece with my knife) but small holes can be fixed with the same tape that is used to secure it to the wing structure. 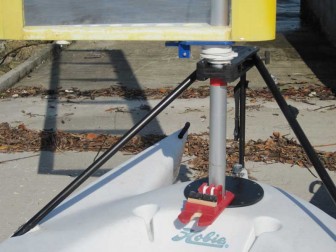 Since this was an experimental wing sail that had never been mounted on this boat, a bit of fiddling was required to achieve the desired fit. To make the forward wing section sit at the right height, a handful of plastic shim rings were placed around the mast. We had to step and unstep the mast a few times to figure it out and Chuck had just enough plastic rings to put it where he wanted it. 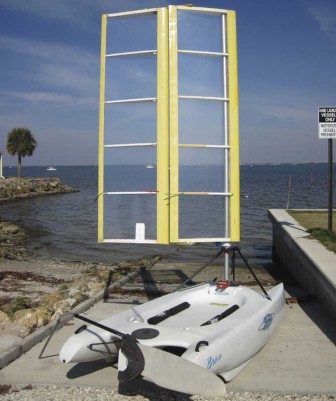 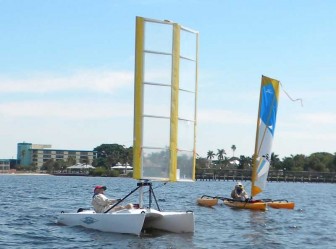 I brought my Adventure Island out to follow Chuck around and take pictures and video of the test, and if something went horribly wrong, to tow him back to shore. The picture of both boats at right was taken by a couple of local sailing club members who had anchored out nearby for the weekend and were returning to their boat. 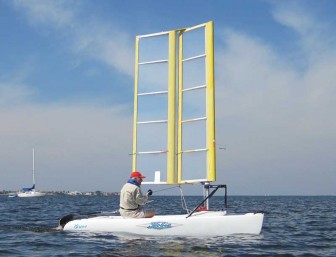 Because the wing chosen for the test was too small for the boat, I was able to keep up with the wing sail-powered Bravo easily and could position my boat to get pictures from the sunny side most of the time. 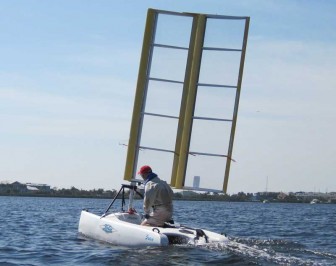 Wing sails are a bit tricky to trim for those of us used to soft sails. It seemed to me that the wing was more sensitive to improper angle of attack than a soft sail would be, and unlike a soft sail, it does not change shape or start to flutter at the edges to give the sailor clues about what is wrong. One way in which the two types are similar, though, is in rewarding proper trim. As shown at right, the wing sail Bravo could scoot right along at a good clip with the wing adjusted properly. 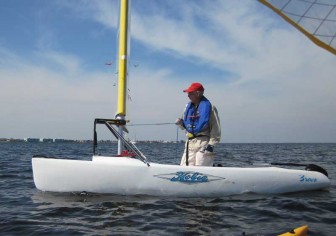 The other way in which they are similar, as shown at left, is in punishing improper trim with poor performance. Neither of us could figure out what was wrong for a little while there. As the picture shows, the telltales were all flying nicely on both sides of the wing and the wing camber created by angling the aft section looked good to our untrained eyes, but look at the wake. The boat was moving very slowly. 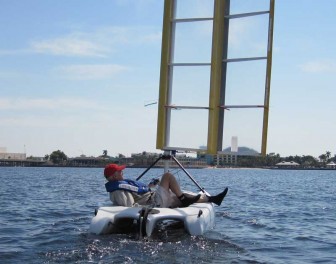 The main question of the day was whether the boat would be properly balanced with the mast in the position chosen. The answer seems to be no. Particularly on upwind headings, I noticed that Chuck always had the rudder steering the boat a bit upwind, meaning it had lee helm. I'm no boat designer, but I know how the boats I have sailed behave: they have a bit of weather helm and if you let go of the tiller, they will round up into the wind. You are always steering a bit downwind to maintain course. The picture at right shows Chuck's tiller almost straight, but offset a bit to starboard, meaning he was steering slightly into the wind to maintain course. It should be the other way around. 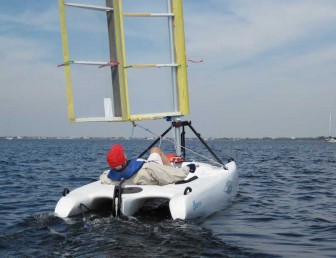 At left, Chuck is sailing a bit closer to the wind and the lee helm effect is a bit more pronounced. Again you can see that the tiller is cocked a bit toward the lee side of the boat, meaning he is having to steer upwind a bit to maintain course. He was lying down under the sail to try to get a good view of all of the telltales and develop a better sense of how the wind is flowing over and between the wing sections. He had earlier shown me a computer generated color picture of how the air flow should look, but there is really no substitute for getting out on the water and trying it to see what really happens. 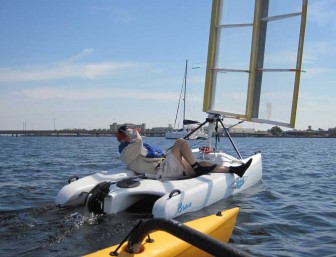 Relaxing in a Bravo

I think that some of the time, Chuck was lying down in the boat not to get a better view of the wing sail, but to relax and stretch a bit. The Bravo is not a particularly comfortable boat and could really use some kind of backrest, or perhaps one of those folding stadium seats.

After sailing for a little over an hour, Chuck was done with his test and had learned what he came to learn. We were lucky to have a beautiful sailing day, with enough wind to power the boat at all times but not so much that it made life difficult. When he went back in, he offered me a chance to take a ride in the wing sail powered Bravo and I was not going to pass it up! 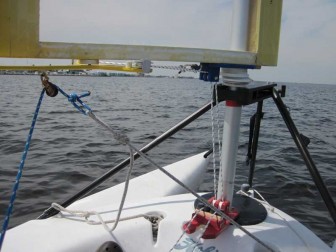 I found that the boat had lee helm on most points of sail, the exception being dead downwind. I also found that sailing with a wing is not all that easy! I have sailed quite a few boats of all sizes and always been able to figure out what works and what doesn't, until this one.

When I got the wing shaped and trimmed properly, it powered up the boat and I started moving faster, but that changed the apparent wind angle and my usual response of sheeting in a bit did not seem to be the right one. The picture at left shows the wing sail control lines. The blue one is the sheet and the two white ones leading down to the blocks and cam cleats in the red fixture are used to control the camber of the wing by changing the angle of the aft section. Changing the camber also changes the size of the slot between the sections.

Having no real idea what I was doing, I experimented with various camber/slot settings, tried different wing angles of attack with the sheet line, and just generally played around with it. I occasionally stumbled onto settings that seemed to work well, but was never really sure why. I would like to try it again with a larger wing and with the mast moved to eliminate the lee helm. I only sailed it for a half hour or so and it it clearly going to take longer than that to figure it out!

Here is a short video I made of our experimental Hobie Bravo wing sail test: