You are here: Home / Sailing / Saw My First Wingsail In Person Today 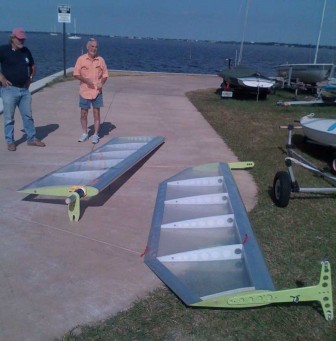 Today I dropped by the Charlotte Harbor Community Sailing Center to borrow some race marks and anchors for the upcoming Sun Cat National Championship Regatta this weekend, and as I drove up I noticed that the truck in front of me had a couple of wing pieces hanging out the tailgate. That could only be Chuck, inventor of the X-Wing Wingsails for Sunfish, Lasers, and other small boats. Inspired by the performance of America’s Cup competitors equipped with wings, he decided to make wingsails for the rest of us and he was there to test the latest prototype.

I helped Chuck get the two wing pieces out of his truck and was impressed by how light they are. This one has two square feet less area than a traditional Sunfish soft sail and each section weighed about 8 pounds. They are made of foam reinforced with sheet aluminum and plywood and are covered with clear heat-shrink plastic.

The forward piece has an aluminum spar inside and a custom base with blocks for wing adjustment. The aft section has a T shaped control bar on the bottom that is used to trim the wing and a block beneath for the mainsheet. 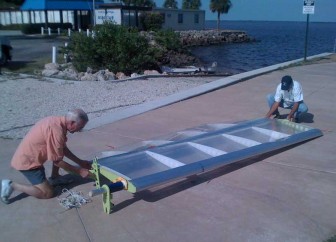 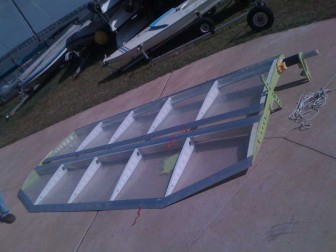 The assembled wingsail, ready for the control line to be run.The angle between the two wing sections is controlled by a single line rigged as a continuous loop. Release the cleats and pull on one side while easing the other and the aft wing section will move relative to the forward section, establishing the overall shape of the wingsail. 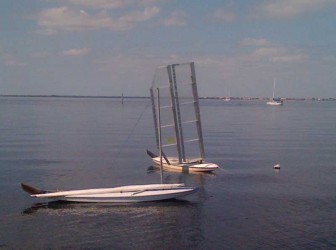 Running some errands caused me to miss seeing the boat under sail. By the time I returned, the wind had died and the boat was on a mooring. I ate a sandwich and watched the few wind ripples on the harbor go away, then decided I should just go home. The wind was starting to return just as I left, so they probably got in an afternoon sail.

I asked Chuck to come out this Saturday while the Sun Cat Nationals are going on so that I can take some pictures and video of the wingsail Sunfish under sail. Hope he makes it, and I’ll update this page with further shots and info if he does! 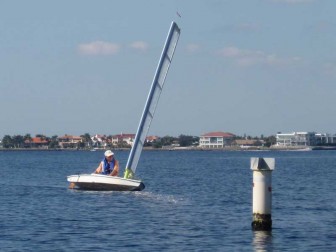 We could see WTF coming across the harbor with another Sunfish as we finished the first race of the 2012 Sun Cat National Championship Regatta. Chuck decided to participate in our second race, as the Sun Cat Nationals is open to all boats, but not all will be scored with the Sun Cat Class.

The telltales on the wingsail were not in good positions and the hard wing does not offer the trim cues that a soft sail does. I think Chuck was trimming and steering by boat speed and feel, a difficult task in the light and shifting winds. When he got it dialed in, the wingsail moved the boat along quite well, but I took the picture at right as we rounded our first mark ahead of WTF. He was ahead of only one of the Sun Cat fleet at that time. 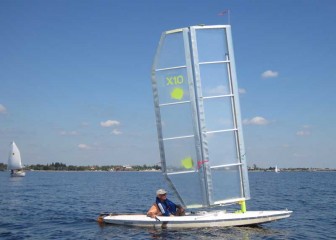 On the next leg, a patch of breeze carried WTF up alongside us, but died before he could make it by and our heavier Sun Cat coasted out ahead of him again. 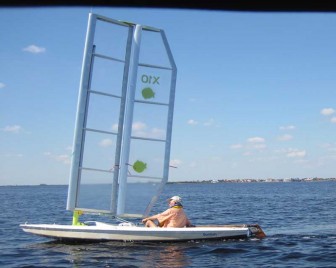 The next attempt worked out better for him and WTF skated by us on the way out to the reach mark. For the picky observers, yes, there is an upside down Sunfish logo set too low on the wing. Chuck said he was not paying enough attention and attached the top and bottom fittings to the wrong ends of that wing section. These things happen with prototypes.

Chuck said those telltales would fly even with the wing stalled, a confusing situation. 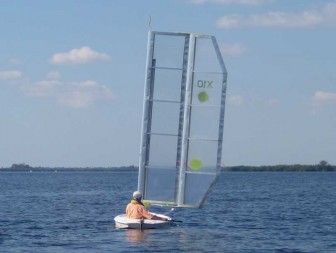 Heading almost directly downwind from the reach mark to the downwind mark, WTF held us off for the whole leg. 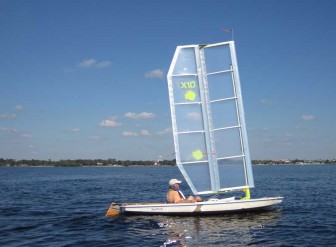 WTF finished the race in one hour and fifteen seconds, faster than three out of five Sun Cats. Results here. The entire course could not have been much more than a nautical mile in length, so WTF managed to claw around the course at an average speed of little over one knot. The average speed in such light winds does not really reveal much, since we all spent a fair amount of time bobbing around with no wind. I saw WTF going quite a bit faster than one knot when there was any wind. 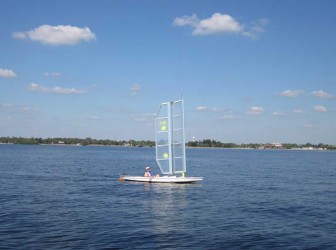 One last picture taken as WTF headed back toward the Charlotte Harbor Community Sailing Center.