You are here: Home / Boat Building / How I became infected with Boatbuilding Disease 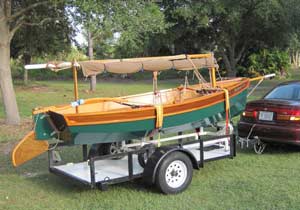 Highland Lass
I have always watched with interest the efforts of home boat builders as they create and customize their own craft, often over a very long period of time. Some of the boats are incredibly beautiful and I can't believe they actually expose them to the hazards of salt and sand. My friend Don's Highland Lass is one of those. Isn't he afraid he might scratch her? Then again, why should he be? He can always just build a new one!

Building a boat is a major commitment of time and money, and I have always been surprised that amateurs are willing to take on the task. My attitude has always been: there are plenty of boats already built, and I would rather go play with one of those than create a whole new one! These people do not build their own bicycles or cars from scratch, changing the design along the way. They leave that sort of thing to engineers and manufacturing firms. Why are boats special? What makes every boater certain that he could actually build it just a bit better than the professionals?

Perhaps it is a sad commentary on the state of the marine industry, which I have often said does not exist to make a profit like normal industries do. Its sole purpose is so that boaters can boat at wholesale cost. Perhaps it is because designers do not cater to our particular pet peeves when creating a boat. In my case, it is drainage. Water, whether on deck or in the interior, should go away. ALL of it! I have frequently been known to grumble that designers should have to personally clean any new boat, inside and out, and leave it completely dry before introducing it to market. We would see better drainage!

In addition to the beautiful small sailing boats, I have always been attracted to small paddling boats that people build, and have taken an interest in recent years in some of the extreme adventures that they undertake with purpose-built small boats. The spirit and resourcefulness of the Puddle Duck Racer group at the Texas 200 and the incredible sailing performances turned in by Randy Smyth in his Sizzor trimaran at the Everglades Challenge really caught my attention, but there were many others. I decided to attend the launch of the 2011 Everglades Challenge, and while there I seem to have been infected with the boat building disease.

I can't really explain the change in attitude, but suddenly I think it would be a cool challenge to create a boat and participate in an event like that one. I think part of the reason is that the Everglades Challenge is a small boat event that takes place right in my back yard. It's my kind of boating, in my location where I possess the advantage of local knowledge for at least part of the route, and a general area knowledge for the entire route. I have been messing about in little boats in tropical Florida waters my whole life, and yet I am not really sure I can complete the Everglades Challenge. I know the difficulties of the course, some a bit too well, and it would not surprise me if at least one attempt ends in withdrawal from the race. 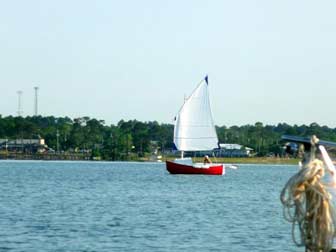 Another aspect of the EC that I enjoy is the profusion of different boats that participate in the event, many of them designed just for the purpose. In addition to the Sizzor trimaran, which I barely saw as it departed, the ones that really caught my eye were the SCAMP, pictured at left, and the Core Sound 20. The SCAMP is impressive to me because they actually managed to create a capable two-person cruiser that is only 12 feet long! It did well in the EC, and would have finished with a respectable time had they not run aground on a mud flat just as the wind blew all of the water out of Florida Bay. The Core Sound looked to me like the only boat in the fleet I would really like to take down the course.

The idea of boat building having grabbed my attention, I did a little research and planning to figure out what I might like to build. I decided to start with a nesting Spindrift dinghy, just because I have always wanted one of those and it seems like a good beginner boat. Next, I want to recreate Kinetic Energy, mostly because I can not seem to find one like it to buy. After that, I want to build an Everglades Challenge 22 and enter it into the race. This might take a while...