You are here: Home / Boating Fun / Feeding the Crew on a Ham and Cheese Sandwich 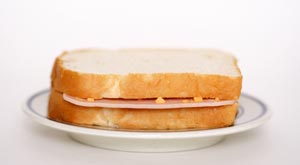 We could play it safe and share a ham and cheese sandwich.

Or we could throw caution to the wind and use the sandwich for bait. If we got lucky, we would be dining on fresh grilled fish. If not, we'd go hungry.

I'd rather feast on fresh-caught snapper, thank you

One fine day, my brother and my friend Gene and I decided to go out for a daysail on our 44' CSY sailboat. Yes, that is a big boat for day sailing, but we did not have a smaller one, so off we went.

About halfway down Biscayne Bay, we were having so much fun that we decided to go on down to Eliot Key and spend the night out on the boat. The boat usually had a fair amount of food on board, but I had been living aboard for a week or two, and had eaten almost everything in the galley. We took inventory, and we could make a ham and cheese sandwich and some rice, but that was about it. We were going to be some hungry sailors.

Risk vs. Reward: Risk It All for Fresh-Caught Fish, or Settle for Ham and Cheese?

We decided to risk our precious stock of food and try to turn it into a bigger dinner. Gene and I took our ham, cheese, and bread and set off with fishing rods and tackle box in search of dinner. Our first thought was to get better bait, so we went into a lagoon of Sands Key and were trying to use bread balls to catch pinfish, or anything else that would bite. I caught a needlefish, but as I went to unhook it, it shook its head and flung itself off the hook! Although surprised, I acted quickly to catch it in mid-air, and it bit my finger! Darn thing wouldn't let go, and I shook my finger really hard, which worked, except that I flung him off my finger and back overboard! D'oh!

Despite that early bloody loss, we did manage to catch a few bait fish.

We Turned the Bread into Bait... Now We'll Try to Turn the Bait into a Meal

We took our bait fish and went on around into Sands Cut, home of some of the best-educated fish in the coastal waters of the USA. These fish have been stealing bait almost since birth, and know exactly how NOT to get hooked. We cut up some bait, and began feeding the fish, hoping to find the occasional stupid one. Of course, that was not happening.

As the last light of day began to fade, we sized up our situation. Now we had only rice, not even 1/3 of a ham and cheese sandwich each for dinner. We were feeling gloomy, and Gene decided it was time to go big or go home. We had one more pinfish. Gene put half the pinfish on a fairly large bottom fishing rig on his big spinning rod. He cast it out into the current of the cut, and just after it hit the bottom, BOOOM, something large had a go at it, stripped a little line, then broke the line. It all happened very fast.

Given that we had been creating some nice fishy smells in the water, and given the time of day, I thought something big enough to do that was not the small snapper or grouper we were hoping to catch, but was probably a good sized shark. Gene didn't think so. He quickly rigged up the other half of his pinfish — our last scrap of bait. He threw it out, and there was a brief pause. Good, I thought. I wasn't really interested in fooling with a shark anyway. I hoped it had gone away.

It Was No Shark!

But in a few seconds, something struck his line again, and started tearing out line against the drag. I could quickly tell it was no shark, and when he brought it up to the boat, it was a nice sized mutton snapper! We brought it back to the big boat as night fell, and began ransacking the pantry to find what we might have to go with it. We wound up having grilled snapper with lemon and butter, seasoned rice, sliced tomato, and garlic toast crackers. It was quite a feast, and we had worked up quite an appetite with our day of sailing and our evening fishing mission.

Sometimes the best trips result from a complete lack of planning combined with sheer dumb luck.

Newer: The 2 Basic Rules of Boating Fun
Older: Should Your Buy Your Own Boat, or Charter?