You are here: Home / Sailing / Sailboat Cruising / Adventures With A Cruising Spinnaker on an Island Packet 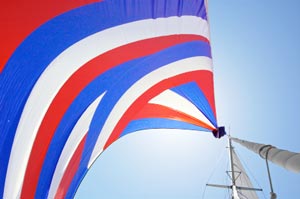 When you go to test a new sail, use your binoculars to take a close look at the parts up top. We would have had a much better trip back from the Bahamas if we had taken a little time to test the spinnaker and observe how it was rigged.

In the late 1980's, a friend bought a new Island Packet 31. He was not an experienced sailor, but had the sense to get some training and keep experienced hands aboard while he was learning about cruising on a sailboat. The boat was in Miami, and he decided he wanted to take a cruise to the Bahamas. My brother, another friend, and I bravely volunteered to go along.

We sailed and motorsailed out to the Berry Islands, cruising up the chain of islands for about a week, stopping here and there along the way. We did some spearfishing, gathered some conch, and even did some hook and line fishing with some success. A good time was had by all.

As we started home from the northern end of the Berry Island chain, we had the prevailing light southeasterly wind behind us. With the main and Genoa sails, the Island Packet was creeping along at just over 3 knots. Not a very satisfactory rate of travel, and we were tempted to start the engine, but our friend had ordered a cruising spinnaker with the boat. The sail had never been flown; it was new in the bag, but we were told that all the equipment to fly it could be found aboard the boat somewhere.

We turned up some sheets and snatch blocks and got the sail up on deck to sort it out and hook up all the rigging for it. Cruising spinnakers are used just like a big jib, so it didn't take long for us to figure out how it was supposed to be rigged and launch the sail.

When we rolled up the jib and put out the spinnaker, we immediately felt the difference as the sail filled up and snapped tight on the lines. The boat quickly picked up to a bit over 4 knots, and we found that she wanted to cruise at an average of 4.5 knots, with bursts of speed over 5 knots when a little puff of wind would come along.

We thought that was just great. We could have gone a little faster by using the engine, but the big spinnaker was quiet and colorful and provided some nice shade as the afternoon progressed.

The Sound Of A Spinnaker Falling

We happily sailed along like that for a few hours, when all of a sudden the spinnaker just silently blew out in front of the boat and fell into the water. There was no noise, so the first thing we noticed was the sun shining on us, where we had been in the shadow of the sail. We ran forward and quickly gathered the sail up out of the water before it was completely overrun by the boat. Without its spinnaker, the Island Packet did a good job of coming to an immediate stop, making that job a bit easier.