You are here: Home / Boating Fun / Wakejumping at Stiltsville 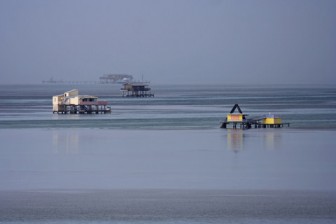 When I was a teenager, we were sometimes invited to parties at Stiltsville houses. Stiltsville is a group of houses built on stilts out in Biscayne Bay south of Key Biscayne. The houses sit in shallow water, but on deep water channels. Parties out there were always lots of fun, with lots of different boats tied up underneath the houses, and plenty for youngsters to do.

That did not mean we stayed out of trouble, however. At one of these parties, I was among a dozen or so teens hanging out down on the dock shooting the breeze. The conversation did not keep my attention completely away from the water, and I spotted a large sportsfishing boat coming in off the ocean and approaching the channel.

I looked into my friend's eyes and glanced out that direction with a grin. He looked at the approaching boat, then looked back at me, and we both started laughing. We saw the same thing: an approaching ramp, crying out for me to jump it.

Pretty soon our friends caught on to what we were thinking and started egging me on. One of them was a girl I particularly wanted to impress. My boat, a Boston Whaler, was tied up right there by only a bow line. I couldn't resist.

I untied the line, jumped aboard and fired up the engine. Off I went screaming at full throttle out toward the approaching sportfisherman, which was now getting pretty close. It was BIG. It must have been 48 feet or so, and was moving along at about 20 knots and throwing a perfect, enormous wake. I had only jumped a few wakes that big, though I often pursued boats long distances just for the purpose of jumping the wake. This one was really something special, and I knew I could catch some serious air.

Wakejumping With Attitude — and Altitude!

In my excitement, I approached a bit faster than I intended, and as I hit full throttle to accelerate up the wake, I knew it was going to be a heck of a ride. The wake was steeper than I had guessed, and I was going too fast when I hit it. The boat launched into the air in a near-vertical attitude. I remember clinging to the steering wheel, looking waaay down at the surface of the water, and hoping like crazy that the boat would somehow land upright.

Best Not to Let Your Boat Insurance Salesman See You Doing This, Though

Meanwhile, back at the party, the teens were not the only ones to notice the sudden activity out in the channel. Our parents were upstairs, and I had caught their attention speeding away toward the big boat. Among the crowd was a lifelong friend of my father's who had gone into the insurance industry, and had sold us our boat insurance. I am told that he looked out in time to see me in full flight, with the outboard's lower unit and propeller high in the air and the boat nearly vertical as it flew through the air. He turned white.

The boat did land right side up, more or less. The bow was still way up in the air as the engine re-entered the water, and it came slamming down as soon as the stern began to touch. I was a bit shaken by my unintended flight, but wasn't about to admit that when I got back to the house. I pulled up laughing, and they started asking me what broke back there.

Huh? It was a heck of a wake jump and a bit of a raging landing, but I did not think I had broken anything. I was careful to throttle back as the engine left the water, and I didn't hear or see anything break. Then they told me something blue had come flying out to one side as I landed, and I knew what had happened. A quick look over the stern confirmed my guess.

We had installed a Doel-Fin on the cavitation plate of the boat to improve pickup onto a plane when water skiing. When I landed in a near vertical attitude, that thing hit the water flat, instead of knifing though the water as it was designed to do. I was going fast enough that when it hit, it just folded and broke in half. I went out into the channel and found one of the pieces. It was ruined, but fortunately, the cavitation plate on the engine did not suffer. Those older Doel-Fins were one-piece units which slipped over the front of the anti-cavitation plate and were held in place by set screws. When the wing folded in half and broke, the set screws just pulled away without damaging the plate.

I got back to the house and received a sly grin from the girl I was trying to impress and hearty congratulations from many of the guys. I think my parents probably lectured me about my reckless behavior, but after you've impressed a girl and your buddies, what teenager is going to remember such a lecture?